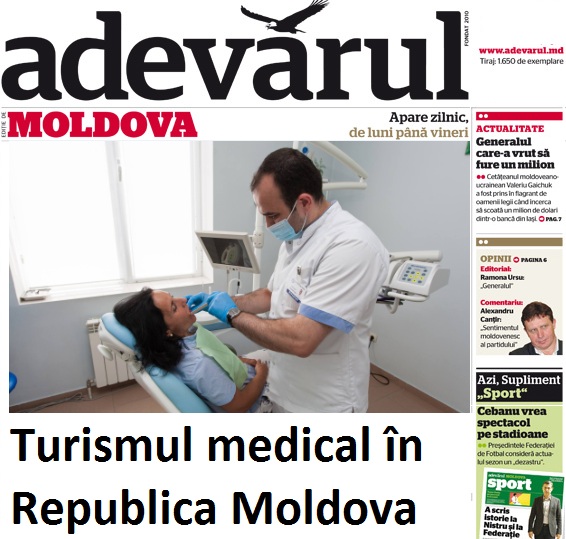 About appearing in the media

The result of this meeting is the article “The medical tourism, increasingly popular among the foreigners who are coming to Moldova” published on 28.07.2015 both in printed form and on the newspaper’s website.

The author of the article notes that “Although the Republic of Moldova is a poor country, it is becoming an increasingly important tourist destination for the Western citizens. It is chosen, however, not for the conventional tourism, but for a less common form of tourism, which has recently appeared in our country – the medical tourism. The foreigners are attracted by the high-quality healthcare and at affordable prices. Most of them come for the dental treatments. The foreigners, who are coming to treat their teeth in Moldova, choose some of the best existing treatments, considered expensive to us but affordable to them”.

You will find below, the translation of some sections of the interviews published in the article and a photo gallery of the participants, confirming the economic advantage of the dental treatment in Moldova, and also an opportunity to save time and make a little vacation in a new place. 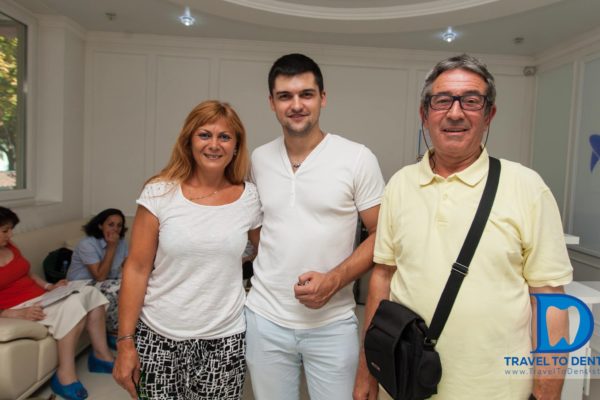 “The prices in Italy for the dental treatments are very high, so I started to search on the internet where else I could have a treatment. I found other offers in Hungary, Croatia and Romania, but I chose Moldova because I found here the most advantageous prices
. The difference of prices in comparison with Italy is around 60-70%, including all the transport costs, accommodation and other expenses. So you can realize that is a big difference. In Italy, perhaps, I would never be able to make such a treatment as the one I make here…” states Gabriella Tassi from Rome, Italy.

Saleh Salah from France says that if he had had the treatment in his country, he would have spent a lot of money. But, in Moldova, with the same amount of money, in addition to the treatment, he can also visit the country. ‘’Here it is much cheaper than in France’’. I save 30-35 % with all the costs for treatment, transport, accommodation, food and my stay here”, stated the Frenchman.

Mihail Ceropita, the director of the first dental tourism company from Moldova says that during these 5 years of running this business, he has ascertained that both the institution he works with, and its clients are satisfied of this relationship’s benefits. However, he remarks that the dental tourism could develop much better in the Republic of Moldova if there were more direct flight routes between our country and the countries of Western Europe. This could influence the ticket price and the journey’s duration of those who come here, remarked also by the interviewed foreigners.

The newspaper “Adevărul” is a daily newspaper from the Republic of Moldova edited in Romanian with a print run of 8000 copies, specialized in the dissemination of information on regarding the current events from politics, health, economics, business, sport, social life, etc.

Are you a media?

Are you a patient?